About GolfGooRoo.com and Cameron Strachan

I've been telling golfers for a long time that the chances are they're making the game harder than it needs to be. If you're having trouble, then learn to take things away, don't add to the complexities of the game. If you don't know how to do this, then maybe you need this site.

Who's this Cameron Strachan and what's he on about? 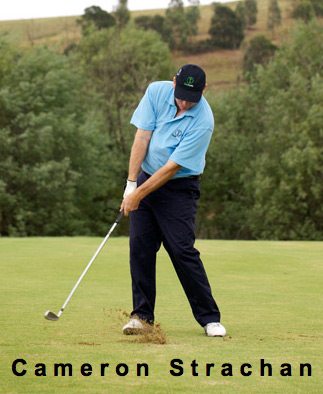 G'day there, my name is Cameron Strachan. My first game of golf was nothing special - it was actually bloody awful. I shot 156 and took 17 hits on the first hole.

My second game was worse - shooting over 160. I had no special talent or skill for the game. But something intrigued me with golf.

The next few months were spent hitting balls in a horse paddock near my home. I'd go back and forwards, totally immersed in the game of golf. And my scores improved too. I broke 100, then 90 and before long I had shot a par round.

Some people thought I was talented and had a gift. This wasn't the case and few knew how dedicated I was.

My success attracted the attention of the local golf scene and I won a golf scholarship soon after. This was the first time I had official golf lessons and it certainly was an eye opener for me. You see, the lessons didn't work too well. I started to struggle and lose my game.

And none of this made any sense. How can you get worse having lessons? Surely, if you do what the pro tells you, improvement must happen?

But it didn't. And at the height of my frustration I returned to my natural game. I went back to hitting balls like I used to do in the horse paddock.

My game returned. I lowered my handicap and found the magic. But then I did something stupid...

... I found another coach. This time being told I'd be on the USPGA Tour in a couple of years. But this never happened.

Instead, I found the frustration and inconsistency again. Golf lessons just didn't work for me. Every time I tried to change my technique bad things would happen. I'd disrupt my instinctive game and be left with something quite hopeless.

And no matter how hard I tried or how many lessons I took, I could never do what the pro wanted me to do. But I learned a valuable lesson...

... that MY way was far better. Each time I stopped mucking around with my swing or technique the magic and fun would return. When I forgot about all the crap and just played the game, I played to my potential. Golf became fun!

Here's the point of all of this: Through study, field testing and scientific research, I believe that much of what you're being told to do is wrong. It's not working for you because most golf instruction works against your learning system.

But when you approach golf like all other skills, improvement isn't just possible, it's guaranteed.

Here's the most important paragraph you'll read on this website;

Almost no golfer is prepared to break free from the shackles of traditional instruction. Yes, you may want to improve your score but chances are you want to do it the traditional way. You want to fit in and not upset the apple cart. You're not prepared to go against the status quo - despite it not working for you.

Don't worry. It's not really your fault. One thing I've discovered is that we're conditioned NOT to go against the grain. We're all trained to conform to the norm and golf improvement is no different.

This may seem radical and even a little controversial in a conservative sport. But if you've tried everything possible to get better but are still struggling, surely it's time to change things up a little? And I'm not talking about massive change or making you doing weird stuff. I'm all about making improvement as simple as riding a bike or driving a car. It has to be simple and it needs to make sense.

Time to help you

You're here because you want to play better golf. You're after a reliable game that will give you predictable results. It's not too much for ask for is it?

I want to help you and here's why:

I know what it's like to struggle and feel hopeless. I know the embarrassment of playing horrible golf. I know what it's like to lose your game completely and feel like you're wasting your time. And I know the frustration of doing everything "right" only to get worse, not better. So I've stuck my neck out and challenged the system and offer frustrated golfers a real alternative.

The first step is to read my book, The Golfer's Nightmare. It's going to cost you a few bucks but it will be worth it, I promise. It's a little book without any BS and is aimed at giving you the know-how on how to beat the system and start playing better golf.

I have said for a longtime if you follow the 7 simple steps in the book you'll be playing better by this weekend.