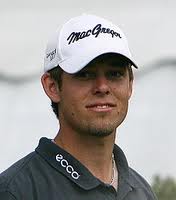 When Aaron Baddeley won the 1999 Australian Open (as an amateur) he beat some of the games best players.

Greg Norman and Colin Montgomery. Not just good players, but great players. Superstars. Intimidating. Confident. And two players who knew how to stare down a young player and put him back in his place.

But not this time.

Aaron showed poise and a level of mastery not seen in such a young golfer. He held his game together and finished off like a seasoned professional.

His putting game that week was the talk of the town. It was almost freakish - he took a few practise strokes looking at the hole (from behind the ball), walked in, got set, took a quick peek and then putted. It was robotic. And Badds didn't change his routine, no matter how high the pressure.

He made putt after putt. He hardly missed and to be honest, his putting game that week made Norman & Montgomery et al look ordinary. And the more pressure he was under, the better he performed.

But I need to back things up a little here. You see, the week before he was worried that his putting game wasn't up to scratch. Here's the story...

Aaron B: Some people have told me that my putting isn't too flash. What do you think Cameron?

My answer may surprise you. I didn't panic and get all worried. Even though I was the guy who showed Aaron the technique (now known as Look and Shoot), I put things back on Aaron (this is real coaching by the way).

"What do you think Aaron? How does your putting game feel to you?"

I wanted to know what he thought. How it felt to him. I didn't care about the opinions of a golf commentator or some crusty golf official.

"It feels awesome! I'm putting unbelievably well and feel I can make everything".

"So why on earth would you want to change?", was my reply.

Aaron had missed some putts the week prior. Something that is always going to happen. No matter how well you're putting, there are going to be times when you miss a few. Yep, you may even miss the odd short putt and you will three-putt a few times. It's going to happen. And it may happen when you least want it.

You simply can't make ALL putts.

But the doubters saw Aaron's style - the quick routine that had the ball on the way to the hole in a few seconds - and blamed that on those misses. But it was rubbish!

Aaron was smart enough to stick to his guns. He believed in what he was doing and a tragedy was averted. He went out the next week and made history - winning a tournament that at one point was considered "the 5th major". Those naysayers now saying how good his putting was and how brilliant his routine.

Many have tried to copy the technique, but few really understand WHY it works and HOW to coach it properly.

Aaron has pretty much stayed on track. Along the way becoming one of the best putters in the world. Even when his long game has deserted him, brilliant putting has kept him going.

A simpler way to putt 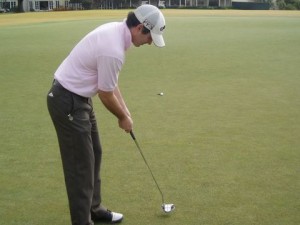 A simpler way to putt

Here's a summary of the system that I think can help any golfer putt better. My ideas are simple. There's no point making golf hard. I have blended my research of science and what I call natural learning. Mixed in with this is 20 years of research, coaching and personal experience.

Embrace this and you MUST lower your score. And the extra confidence you'll have can only be a good thing for the rest of your game.

The 80/20 Rule has played a large part of my thinking in recent times - this is where a small amount of your effort gives you the greatest result. It allows you to move large doors with the smallest hinge and is the biggest breakthrough I've made in golf coaching in a decade.

Here are some of the key ideas for the Look & Shoot Putting System...

You want putting to become automatic. Exactly how you ride a bike, throw a ball or drive a car. These skills are performed daily with the least amount of fuss and energy. It's how we're designed to perform.

Sadly, most golf instruction just adds to the complexity of an already difficult game. Here's a better approach...

Look at the hole (or where you want to putt the ball) and then walk in and go.

You are keeping thoughts about technique and mechanics to a minimum. In fact, "automatic" 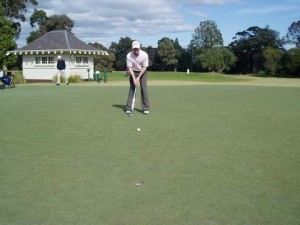 Keeping thoughts to a minimum

works brilliantly well with putting because the skill is so simple. There's not a lot of moving parts and anybody, even with a hint of talent, can move the putter back and forwards.

The simpler you keep your thoughts about putting the better you'll do. This also applies to reading greens - you really only need to get a rough idea about what the putt is going to do. The fine tuning is done at the subconscious level.

Most golfers putt really well on the practice green prior to play. This happens because you're not cluttered and worried about your technique - we look at the hole and then putt the ball. Bingo! The perfect way to putt!

Once we get onto the golf course we tend to think and analyse. But you've got to resist the thinking. You've got to keep things as simple as possible.

So keep looking where you want to putt and then walk in and pull the trigger. Simple...

When you become more aware of your thoughts and feelings you'll notice how much chatter is going on. Your mission is to ignore the internal distractions and keep putting. Don't let your Pesky mind ruin your day.

I know all of this can sound too simple but what else can you really do?

Does the worry about your putting stroke help you?

Or what about worrying about the line? Or
thinking too much about what will happen when you miss?

None of this helps you. My best advice for all golfers of all abilities is to keep putting the ball with the least amount of distraction. Think less, not more.

I have been coaching golfers for years now on how to putt better and play their best golf under pressure. Here are some of the common mistakes golfers make with their putting game.

Try too hard: I know it seems like the right thing to do, but trying really hard just complicates an already difficult game. You've got to think and worry less. Look at the hole and putt the ball. Your subconscious really is good at hitting the ball and judging distance.

Play too quickly: While it's true that when you start putting automatically you'll generally play faster, you shouldn't TRY and play fast. Let the pace of play come to you...

I've seen golfers get into all sorts of trouble by attempting to play fast. But this puts undue pressure on your system. You want to get comfortable first and then putt the ball. Any contrived attempt to play quickly will normally result in overload.

Lose the plot: When I say "lose the plot" I mean golfers get away from the simplicity of the Look & Shoot System.

They want to analyse. They want to change putters. They want to alter their technique. They stop looking at the hole and then putt the ball. And once you lose the plot you're making putting way harder than it needs to be.

Stick with the process. It works and if you're honest it's how you putt when you have those magical days.

Don't deal with reality: I don't guarantee you'll make every putt. It's just not possible. Putting is a little bit like a black art - some days the putts will find the hole and other days you can't make a thing.

The smart golfer will turn up and continue to putt. They don't let a few misses distract them. The poor golfer will get upset and look for immediate change.

When you're automatic you're not guaranteed to make every putt you look at but you are maximising your chances of sinking the putt. Do this long enough and you'll turn into a very good putter that has very few bad days.

Sidenote: I have seen many good golfers almost destroy their golf game because of a missed putt or a poor game. The best bet is to laugh off the odd poor performance and keep playing the game. The same goes for putting.

If all this sounds too simple and easy then think again. Automatic really is how you drive a car and throw a ball. And it's the difference between unlocking your best game or driving home from the golf course frustrated and confused.

There's no magic involved here. Just proper instruction based on the science of learning.

Get the E-book that changed putting (only $7)

Over the years I've heard all the theories (tried most of them) and seen hundreds of new putters hit the market. The truth is, nothing comes close to making putting more effective than when you can learn to putt more naturally.

My Look & Shoot manual gives you the full story. And you can get it at a special introductory price of $7 (normally sells for $47). Here's just some of what you're going to discover;

Discover the real secrets behind the Look & Shoot system and how you can improve your putting without changing clubs or messing with your technique. Get your personal copy of my new and updated E-book for only $7 (normally $47) 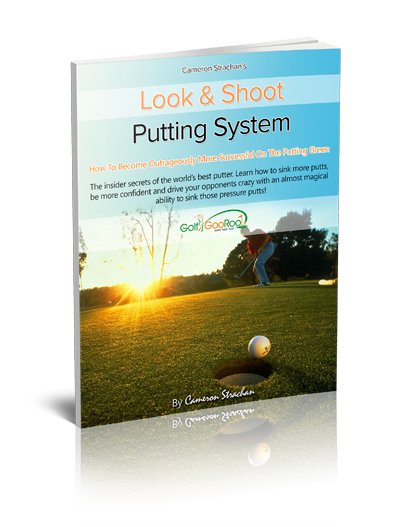 “Cameron Strachan turned my putting from the weakest link into my strongest.

“Using Cameron’s technique has helped me become a successful putter which in turn has enabled me to win professional golf tournaments.

“I believe that Cameron’s Perfect Putting System will help you improve your putting and turn it into your greatest strength”. 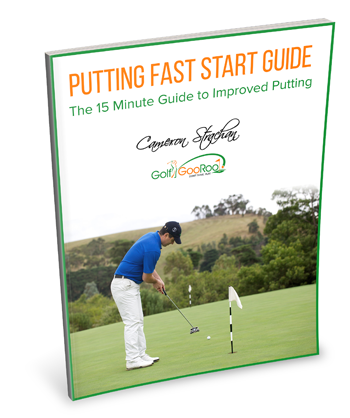